CrossFit is more than a workout. It’s a lifestyle. And, ESPN college football reporter Jenn Brown is embracing that lifestyle. 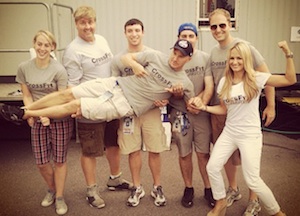 While on assignment for the Little League World Series, Jenn Brown utilized the Williamsport Crossfit location.

After attending the 2012 Reebok CrossFit Games in Carson, Calif. this summer — the event was streamed live on ESPN3 and televised on ESPN2 this fall — Jenn’s eyes were opened to a whole new world of health, fitness, nutrition and sense of community.

The passion the athletes displayed was so impressive, that Brown dove head first into CrossFit workouts while covering the Little League World Series for ABC and ESPN in August. She hasn’t looked back since.

Brown knows a thing or two about being a passionate athlete herself. She was captain of the Florida Gators softball team her senior year.

She joins the ranks of ESPN on-air talent and employees who are embracing CrossFit. Last year, ESPN NFL analyst Tim Hasselback discussed why he does CrossFit. In addition, ESPN recently welcomed the 2012 CrossFit Games champions to campus.

In the video above Brown took some time out of her hectic college football schedule — she works the Penn State at Illinois game this Saturday with Dave Pasch and Brian Griese (Noon ET, ESPN) — to talk about her growing passion for CrossFit and to demonstrate a few exercises.

« Where it all started…
David Foster Wallace, In His Own Words »